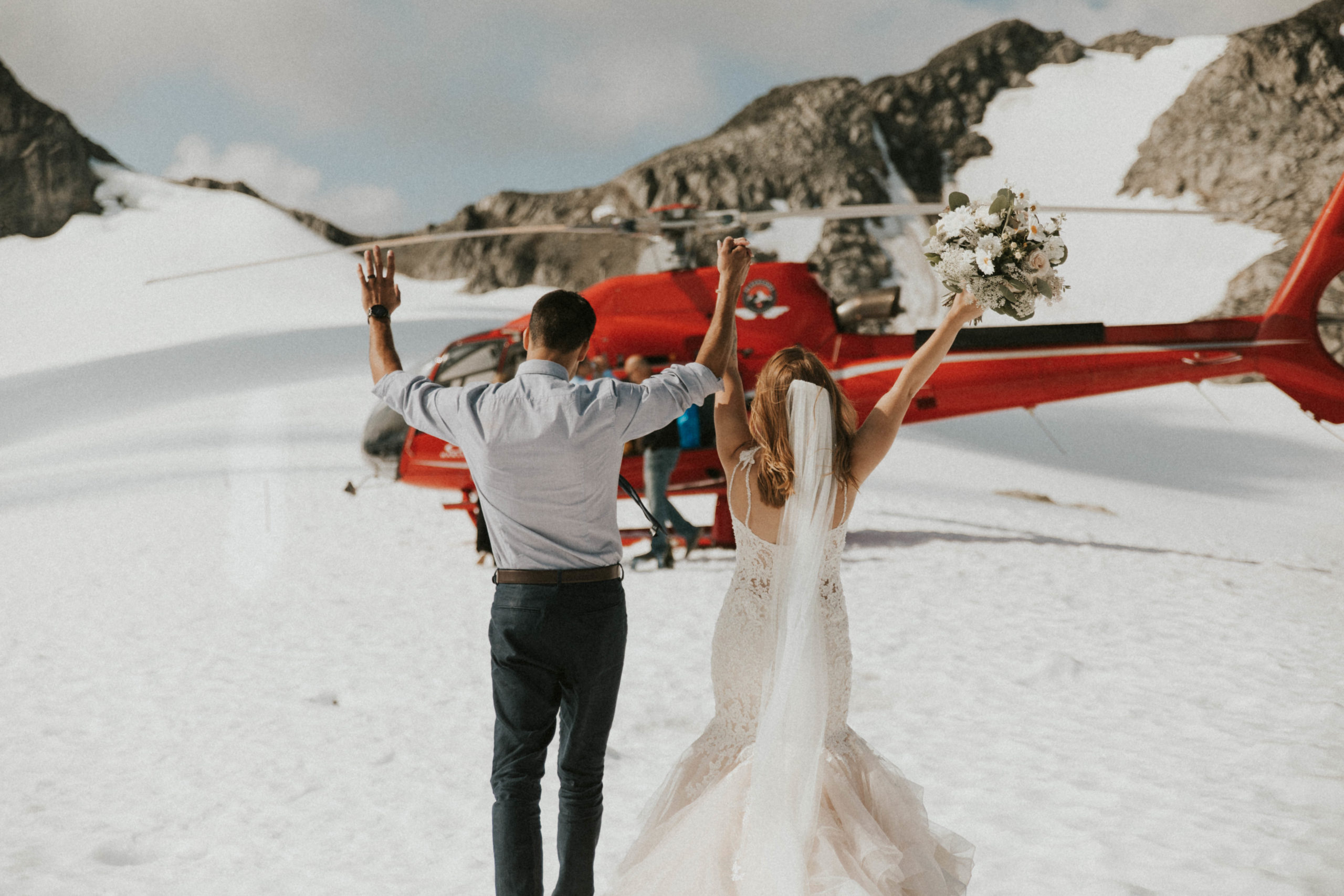 Elopement in Whistler BC | Helicopter Elopement

A whistler wedding is nothing short of magnificent. With its stellar good looks, and impeccable location options it is quite the contender! It is also one of our favorite and most popular destinations for elopements & tiny weddings. Each and every Whistler elopement fills our hearts ad leaves us so impressed by mother nature (and of course the people in Whistler too). We are pumped to make this blog and show off our favorite Whistler weddings!

We have included only our top favorite photos, for more galleries please shoot us a message! 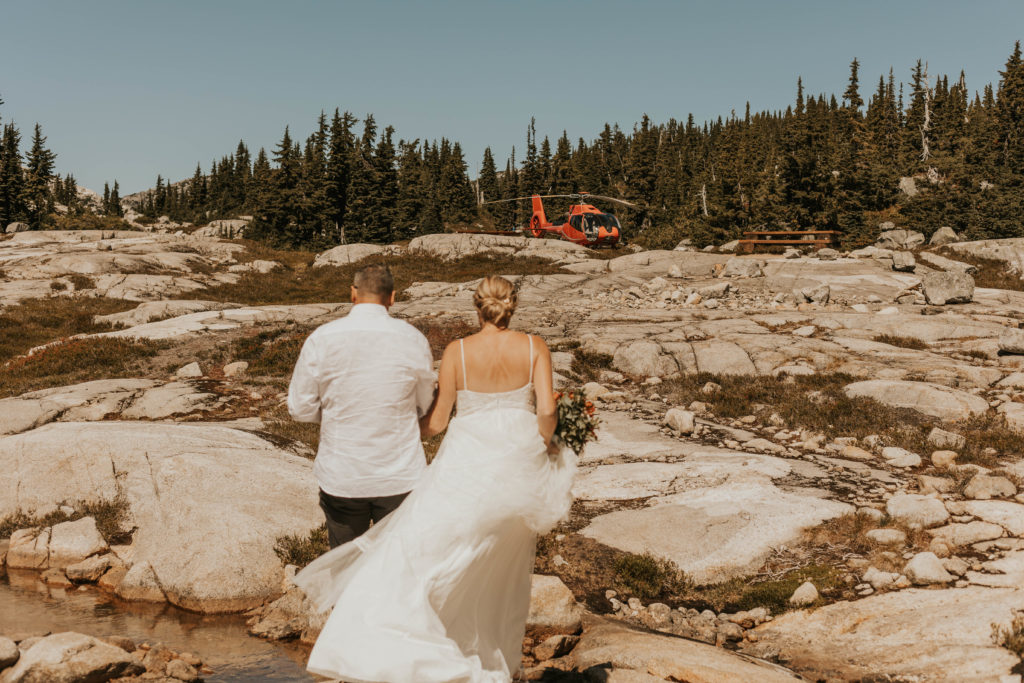 First up is H + M, with their July whistler elopement. 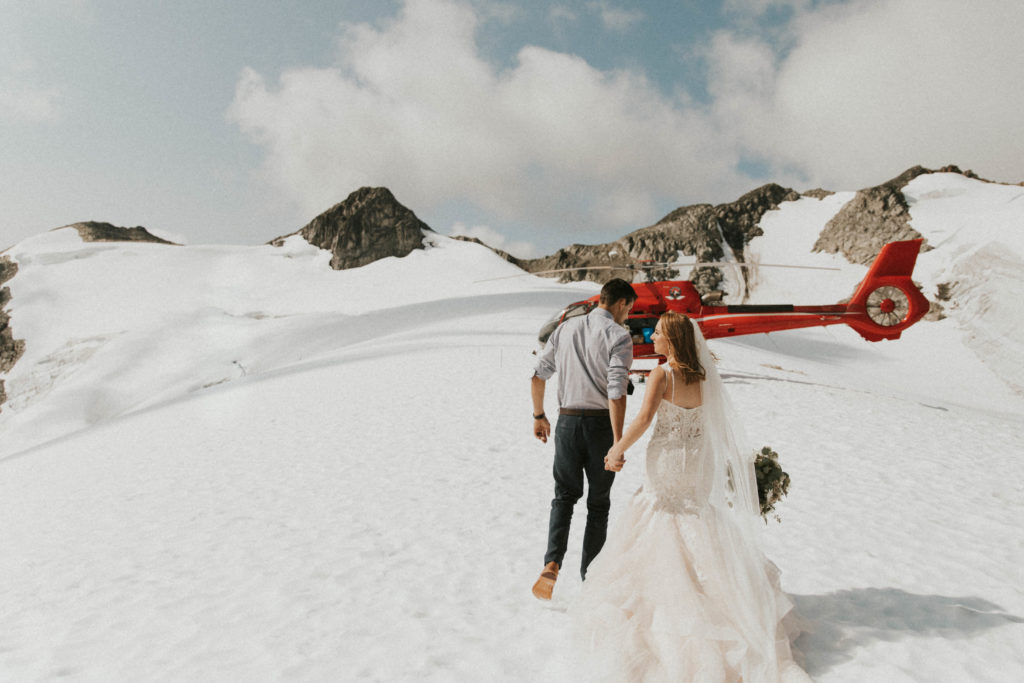 H and M were an adventurous couple that we had the opportunity to work with on their momentous day, saying I do on Rainbow Glacier in Whistler BC.

When it came to planning we knew, it had to be something authentic to them – and something outdoors. A small wedding didn’t strike their fancy, but a whistler elopement certainly did! Their elopement and love story is so eccentric — if you ever needed the push to just elope, this is the story for you.

H & M inquired about an elopement a few months before an official date was chosen. These two loved hiking and seeing beautiful things, so they wanted something different and nature orientated for their elopement package. Essentially something nontraditional, and not typical of the people in their area! The couple wanted more than just a ceremony, they wanted an experience – and we resonated with that, we want to give and aid couples in having an amazing elopement experience.

There was tossing and turning on which location would be ideal, but ultimately came to the conclusion that a mountain top helicopter elopement in Whistler would be perfect, specifically on Rainbow Glacier. With the worry of what parents would think, and what family would say we planned quickly, and efficiently in silence. The bride and groom kept the whole thing as a secret for months. No one but the bridal party and vendors knew a thing!

Together with the bride we worked at finding vendors, and eventually found the perfect fits. It was so great to have such a supportive team, including Blackcomb Helicopters, Whistler. The bride was able to book a stay at the Ava Hotel in Whistler, where she met with make up & hair artists Kerry Waring and Chloe Paterson. The hair and make up, was so elegant and matched with the beauty of the floral from Studio Floretta.

The night before the wedding H & her best friend whom doubled as maid of honor, stayed in the Ava Hotel together. The morning of was filled with nervous giggles and excitement as Kerry Waring tended to the brides hair and Chloe Paterson added to the MOH’s already beautiful complexion. Meanwhile the men were down the hall sleeping. It was a early morning but all the vendors and the girls were super excited to be apart of such a unique day.

On the day of their union, we arrived at Blackcomb Helicopters hanger early in the morning. The sun was peeking out behind the silver shaded clouds, but once we got into the air, we saw the clouds clear. It was a sigh of relief for the couple who loved the golden glow. The sun finally came out to brighten the day just as be landed on Rainbow Glacier, which is a 20 minute ride from Whistler. When we arrived on the glacier, we felt the crisp cool air on our skin, making us feel excited and alive: we knew this elopement package was the right decision for them!

We started the adventure by climbing a steep mountain rock to get to the top and find the right place for the ceremony. While climbing, H was a total trooper, wearing just her Blundstone shoes and a stunning Morilee – Marciela Wedding Dress. We spent some time scouting around in the freezing cold but not feeling a thing, just living for the beauty of the mountains. Once we finally found an opening that was perfect for their exchange of vows, we took a deep breath and took it all in. The back ground was filled with rolling mountains covered with forest that had snowy tops, and the sun was dancing among the soft clouds in the sky. It was a beautiful sight to see, especially with these two who shared a genuine connection between them celebrate their love. It was summing up to be the perfect whistler helicopter elopement.

Once they settled in we began the ceremony, with Tracy Kerr commissioning. She opened the ceremony with a few unique comments & a story that got a good laugh from everyone. They then exchanged vows that were heartfelt and so personal to each other. With only their best friends and the skies as witness they laughed and cried as they dedicated themselves to one and another on rainbow glacier. As their first kiss as a married couple took place, a miraculous rainbow appeared, which I guess is why they called in rainbow glacier!

After the ceremony, we continued to climb this mountain, laughing and sipping champagne. We took candid photos of the couple being their true selves and experiencing the beauty of the peak around them. H & M have a very playful and fun relationship – so the humor didn’t stop. H and M were beaming just like the sun in the sky as they were adventuring around the glacier. It was a sight to see. When the helicopter pilot let us know it was time to go we scooted to hike back up the mountain and onto the glacier. I was so proud for H as she concurred this cliff in a wedding dress. We laughed on our way to the helicopter, and said our goodbyes to Rainbow Glacier (which rightfully earned its name after showing us amazing colours bouncing off the snow).

After a stunning view on the way back to Blackcomb Helicopters, we drove back into the town of Whistler. Included in their elopement package was a few stops to adventure around the Whistler BC backwoods. We photographed our mini (I say this because nothing compared to the mountain top glacier we were just on) adventures in the forest and lakes we found nearby. We drove to many locations, including a suspension bridge and also made a few pit stops for potty breaks too. The couple shared stories of their love, and their life together and how they came to the conclusion that eloping was right for them. The little car was packed with people but it didn’t feel squishy as we all sang to rap songs and enjoyed out time.

So there be the story of H + M and their wonderful surprise Whistler elopement. Enjoy some photos from their day! 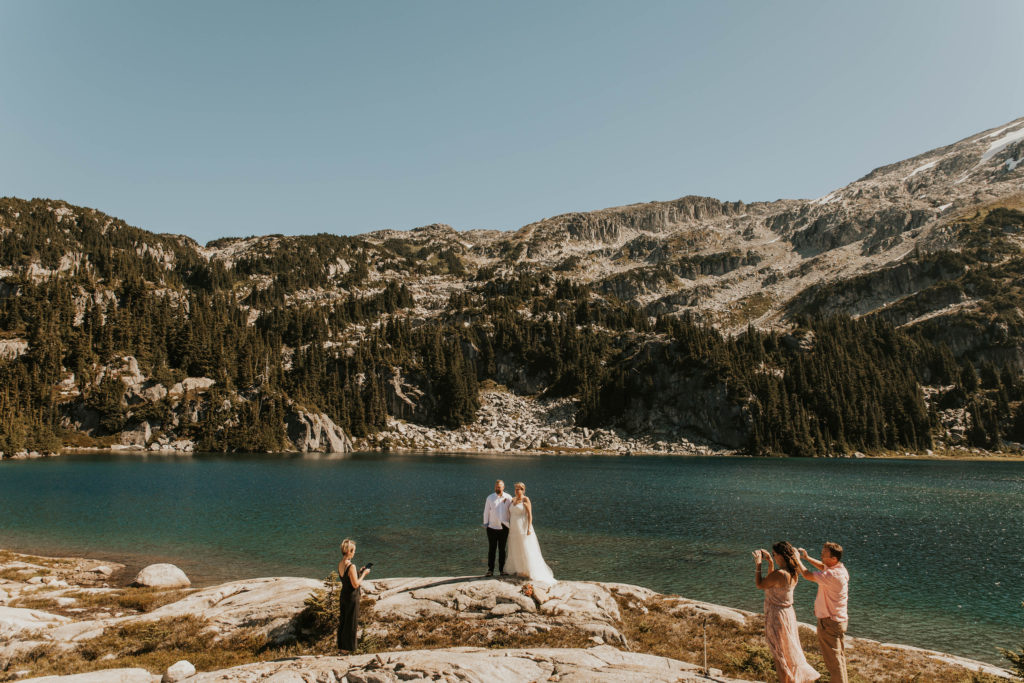 J + S reached out not long before their desired date, and they originally thought a ground ceremony would be the answer for them! With not a whole lot of time to plan, our team recommended a helicopter elopement, to make sure we got them the coolest elopement and one they would brag about forever. We quickly got to work on putting this together for them, creating a package that fit all their needs!

They were coming from Eastern Canada to celebrate their friends anniversary, but wanted to finally tie the knot as well!

A + A, a Ice Field Elopement 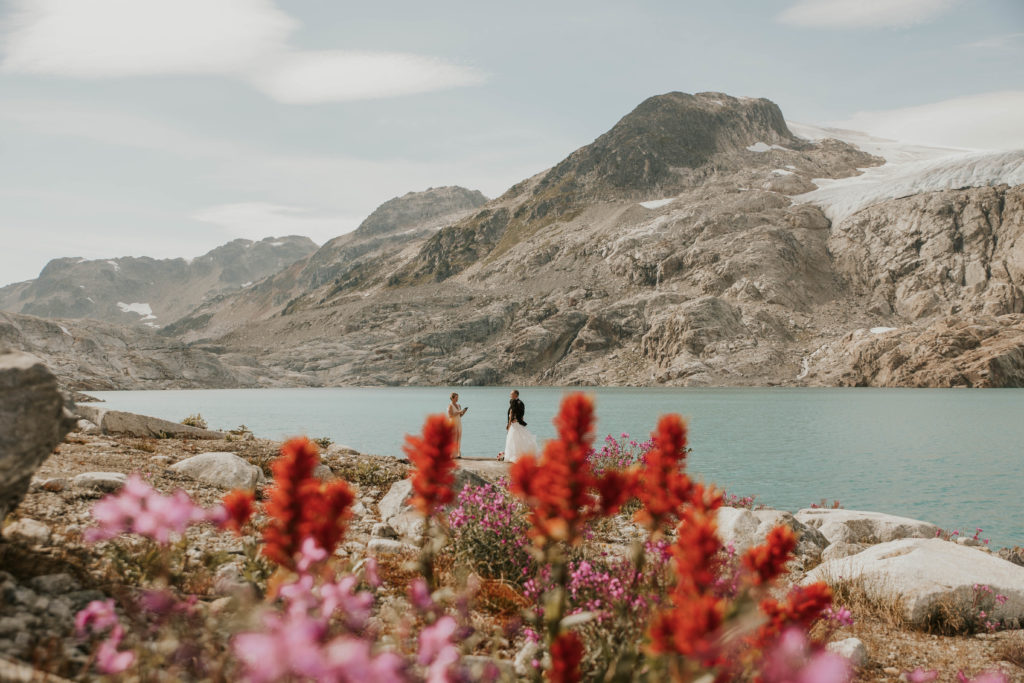 A + A inquired with us for a heli wedding with Banff mountain and blue water vibes, but a little closer to their home in Kelowna. We ultimately decided Whistler would be the best fit, since we could get beautiful scaping mountains and bright blue waters! Originally we were set to fly with Blackcomb Helicopters to Beverly Lake, and Mt.Currie. However mother nature had other plans, with huge gusts of smoke rolling in our team got to action fast and we were able to fly away from the smoke and to Ipsoot Ice Fields. Which is just as breath taking, with sweeping mountains, waterfalls, wild flowers, and those beautiful blue lakes. The couple was happy with the last minute changes, and luckily we were still able to fly!

The couple had a wonderful ceremony with Nicole with Lovely Day Events, and after that we explored around taking photos while taking in all the sights. After about a hour, our time was up and we boarded the helicopter and headed back to base. The couple had wanted additional photos on the ground, so we went to another secret location right along the water of Green Lake.

FROM “MADE FOR YOU” PACKAGES TO CUSTOM REQUESTS, EACH
ELOPEMENT IS HANDCRAFTED BY OUR TEAM
GET STARTED
Scroll to Top